Insta360 ONE RS with Dual 1-Inch Sensors for capturing unparalleled image quality by outstanding dynamic range is launched on June 28, 2022. It's the first 360-degree camera that can record impressive video at 6K quality. Before the company launched its 4K camera with the same name but this 360 camera is much different. As we all know that this Insta360 company is always pushed its level to a higher level. This time the company has to design an all-new different 360-degree camera with Leica engineers, who have expertise in optical design.

Not only the features and specs the company has done a great job in designing the body too, but they have also given such a portable design that can be carried anywhere. The target customers of the company are those who love advantages. So, keeping them in mind, the company has made this wonderful camera. Insta360 has shown this camera with various advantages on its website like paragliding, hiking, running, racing, etc.

But if you think this Insta360 ONE RS is only capable of taking advantage of photos or videos then you are totally wrong, as it works in sports it works more significantly in the normal environment too. You can capture the best video quality in the Night Mode.

Insta360 ONE RS price in India and USA

If you want to add more accessories then you have to pay extra:

All-Purpose Kit is priced at $859.99 that includes all Get Set kit equipment including extending the selfie stick to 2 sections (~70cm) with the ONE RS 1-Inch 360 Edition for taking stable photos and videos in the Shecky situation.

Whereas, the company's previous Insta360 ONE RS Twin Edition 4K 60fps with Water-Resistance Rating Action Camera is available at Rs 49,999 on Amazon India. 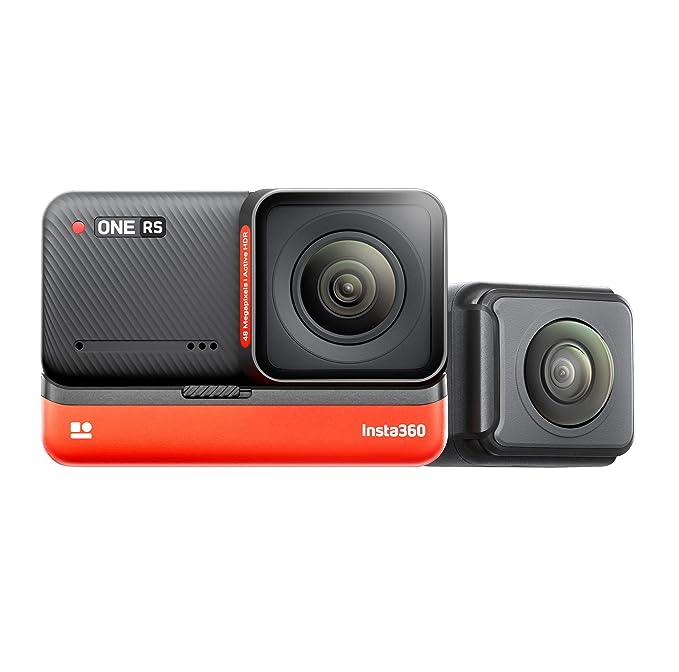 Insta360 ONE RS specification and features

For the best stability in photos and videos, it carries 6-axis Gyroscope with Flowstate stabilization technology that captures incredibly smooth videos even while running, taking videos from a car on a bad road, bike racing, etc.

The company provides a feature named 360 Horizon Lock that locks an angle and captures from it no matter at what angle your camera is at without a gimble.

It comes with IPX3 water-resistant rating, which means you can carry it for your underwater adventure. It has a small display from which you can access the Quick Menu for an instant shoot, or even you can host a 360-degree live stream.

For the connectivity options, this camera has the latest Wi-Fi 5 GHz, Bluetooth v5.0 options with Type-C wired connectivity. The camera is capable of storing 1TB of storage via a MicroSD Card.

Insta360 has given a massive 1350mAh battery that can be charged with a Type-C adaptor. The company claims that it can be fully charged in 90 mins on power off. The design is a very portable premium look with just 239 grams of weight and 53.2 x 49.5 x 129.3-mm in dimension.