The most loved laptop of students launched in Europe Lenovo ThinkPad E14 and Lenovo ThinkPad E15 G4. This Lenovo ThinkPad series of laptops is usually used by students because it is very handy to use and it can be opened at a 108-degree angle. The company has made this laptop light-weighted with a premium design texture on the body. this ThinkPad series laptop carries all the mostly used specs and features in the justifying budget. As an Indian, we are very much concerned about the price tag of any item but I can promise you that this new laptop will satisfy all your needs of a student's in daily life hassle. The company is offering all the good specifications with this ThinkPad E14 and Lenovo ThinkPad E15 G4 laptops that are powered by AMD Ryzen 5000 series processors, and also available with SSD storage in both models. As we all know that the SSD will make your laptop works fast compared to HDD storage, and if it gets a good processer then it provides the best performance. Both the models come with full-HD IPS displays that will enhance the viewing experience in watching movies that usually a student used their laptop to watch.

The Lenovo ThinkPad E15 G4 comes in two variants, whereas the latest Lenovo ThinkPad E14 G4 is available only in one option as of now. Expected that the company will launch more variants in ThinkPad E14 G4 series.
Both the laptop models have similar design and build quality, the company has given an aluminum frame that enhances the rigidity. Both the models have a narrow bezels display with a full-HD webcam with ThinkShutter, a backlit keyboard, and a biometric fingerprint sensor to unlock the laptop.

The company has only changed the performance in both the models that differentiate the price. But I can promise you as a student you are searching for a laptop, then these laptops will be the best laptops for your daily usage in this price range.

Because I am using the previous generation of this Lenovo ThinkPad series for a long time it satisfied all my needs.

The company has set the price of the Lenovo ThinkPad E14 at EUR 719 which comes to approximately Rs. 60,500 in India. If you are willing to add more powerful specs that you have to pay more with the upgraded features and hardware. with various options offered on the website, and will be available for purchase in May.

As of now, the company has announced the availability only with the AMD Ryzen 5000 series processors but we are expecting the intel processor soon.

And the ThinkPad E15 G4 with a quad-core processor starts from EUR 569 (approximately Rs. 47,850 in India) available for pre-order. The laptops will be available for direct purchase from April. 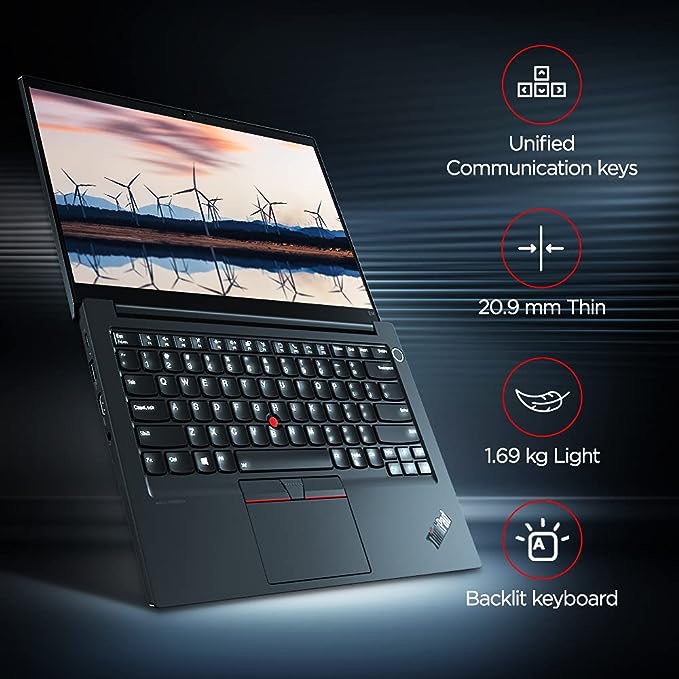 The latest Lenovo ThinkPad E14 G4 laptop features a 14-inch full-HD IPS display with 1,920x1,080 pixels of resolution. The ThinkPad E14 G4 is powered by an hexa-core AMD Ryzen 5 5625U processor coupled with 16GB of RAM and 512GB NVMe SSD that makes the laptop performance faster and smoother. The laptop has an AMD Radeon RX Vega 7 graphics GPU that helps in heavy tasks like video editing, gaming that usually a student wants to perform on their laptop. The company has given a full-HD IR webcam with Windows Hello for online classes. The sound becomes refined with the dual array microphone that begins this laptop perfect for students. The highlight specs are the two 2W Harman speakers with Dolby Audio that brigs the movie experience more realistic. And the company has provided a backlit keyboard that makes you type in a dark environment. It has biometric authentication options including a fingerprint sensor to unlock the laptop that enhances security.
Taking about the Connectivity options it includes two USB Type-A ports, one USB Type-C port, an HDMI socket, and a 3.5mm headphone jack where you can plug an external mic also. The ThinkPad E14 G4 comes with a dual-band Wi-Fi 6 and Bluetooth v5.2 wireless connectivity options. It carries a large battery that gives power to this laptop for upto 15.8 hours with RapidCharge technology, it can charge upto 80 percent of the battery in an hour as per the company claims. The laptop design look premium with a lightweight of just 1.67 kg.

The all-new Lenovo ThinkPad E15 G4 features a 15.6-inch full-HD IPS display with 1,920x1,080 pixels of resolution. The ThinkPad E15 G4 is powered by a quad-core AMD Ryzen 3 5425U processor coupled with 8GB of RAM and 256GB NVMe SSD internal storage. It gets an AMD Radeon RX Vega 6 graphics GPU that makes the laptop faster in heavy work. The Lenovo ThinkPad E15 G4 laptop has also the same full-HD IR webcam but it comes with a ThinkShutter on the camera lens that covers it when not in use. It also has the same dual array microphone, two 2W Harman speakers with Dolby Audio surround sound experience, backlit ThinkPad keyboard with trackstick, and biometric fingerprint authentication sensor.

The company has included an HDMI socket, two USB Type-A ports, one USB Type-C port, an RJ-45 connector, and a 3.5mm headphone jack as connectivity options in Lenovo ThinkPad E15 G4. And for wireless connectivity, it comes with a dual-band Wi-Fi 6 and Bluetooth v5.2. The ThinkPad E15 G4 carries a slightly smaller battery that can offer upto 13.6 hours of battery life compared to the Lenovo ThinkPad E14 G4. But this laptop also has RapidCharge technology that can charge upto 80 percent of the battery in an hour as per the company claims.

According to the company officials, the latest Lenovo ThinkPad E15 G4 gets similar specs in a display, features, battery, and connectivity options with ThinkPad E14. The difference only exists under hardware like processor, GPU, RAM, and storage where it comes with an octa-core AMD Ryzen 7 5825U processor with 16GB of RAM, 512GB NVMe SSD storage, and AMD Radeon RX Vega 8 GPU.