Samsung is going to launch a new smartphone in the Indian market named Samsung Galaxy M52 5G. The company has announced the launch date on 28th September. A few weeks ago the e-Commerce online company Amazon has published a dedicated page for Samsung's new smartphone with few specs. But now Amazon has refreshed the launch date of the Samsung Galaxy M52 5G. This smartphone comes with the 5G connectivity option which is now common to devices that launched at this price point. The company has hinted that this phone will be launched through a live event on various social media platforms. The phone has a triple camera setup with a tin design. (Price updated on 9th June 2022)

The company has not announced the price of the Samsung Galaxy M52 5G in India yet. But a Polish shopping website caught with the listed price of PLN 1,749 (approximately Rs. 32,900 in Indian rupees) for the 8GB + 128GB storage variant option. The smartphone has listed in Black, Blue, and White colour options. 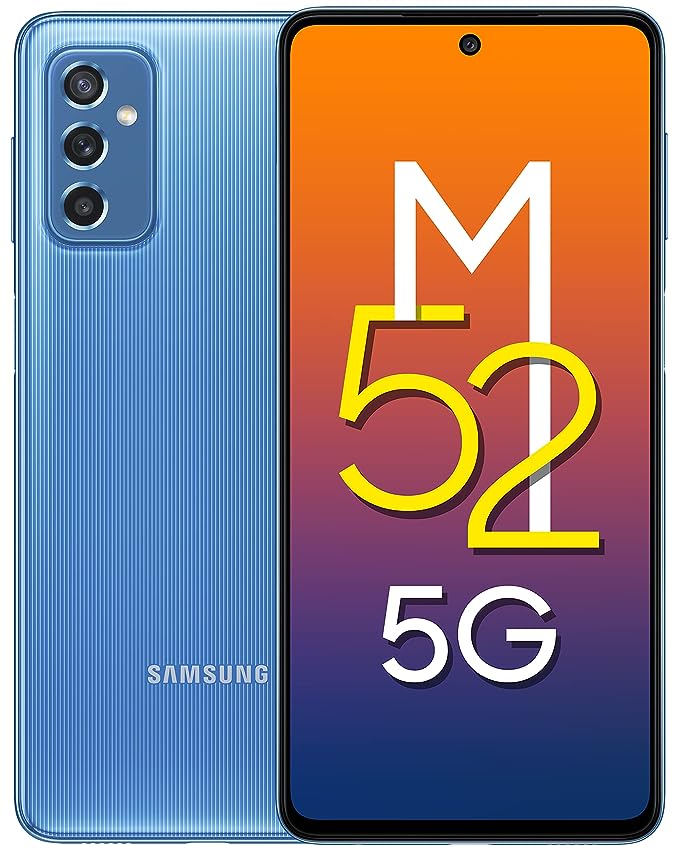 By looking at the photos that have been circulating on social media we found that the Samsung Galaxy M52 5G will carry a triple rear camera setup at the back.
According to Poland's shopping website, it features a 6.7-inch full-HD+ Infinity-O Display with 1,080x2,400 pixels, including a 120Hz refresh rate display by 20:9 aspect ratio. The smartphone is powered by an octa-core Qualcomm SM7325 chipset with 8GB RAM. The smartphone runs on the latest Android 11 with One UI 3.1 skin on top.
The phone carries a triple camera setup where the primary camera has a 64-megapixel sensor, the second camera has a 12-megapixel ultra-wide shooter and the third camera has a 5-megapixel for the macro shooter. It also has a 32-megapixel camera sensor for the selfie with a hole-punch display.

Its time to ditch your bulky old phones people! The #LeanestMeanestMonsterEver has finally appeared on the scene and this time it’s 21% sleeker and 100% on fleek. So, flaunt your style with a 7.4mm super slim monster and turn ‘em heads like never before. pic.twitter.com/GhJhfWuiHq

Most affordable launch by Samsung: The Samsung Galaxy M01 Core

All You Need To Know About The Latest POCO M2 Pro

Samsung Galaxy A31 Launch in India Today At 2 PM, Expected Price, And Specifications