A new 4K smart tv-series is launched in India by a company Vu named Vu Masterpiece Glo QLED TV series. These will be the latest high-end models of smart TVs from Vu with a premium bezel-less display. The company has made this design look premium compared to its competitors. The VU all-new smart premium TVs are available in three models 55-inch, 65-inch, and 75-inch. The 75-inches model will be the most expensive tv from this company Vu. Before this company has made its status in the best affordable smart tv segment but now the company is trying to gain some percent of the expensive smart tv market in India. The consumer who looks for smart tv under 20000 recognizes Vu smart TVs as one of their options. Not only the looks but this Vu Masterpiece Glo QLED TV series also has premium specs like it has a quad-core processor coupled with 3GB of RAM and 16GB of internal storage, a 100W Armani Gold 4.1-channel sound system, and a 120Hz refresh-rate display.
But the company has to improvise the price of these TVs because the price of these TVs is quite higher as compering to other TVs of the same screen sizes. 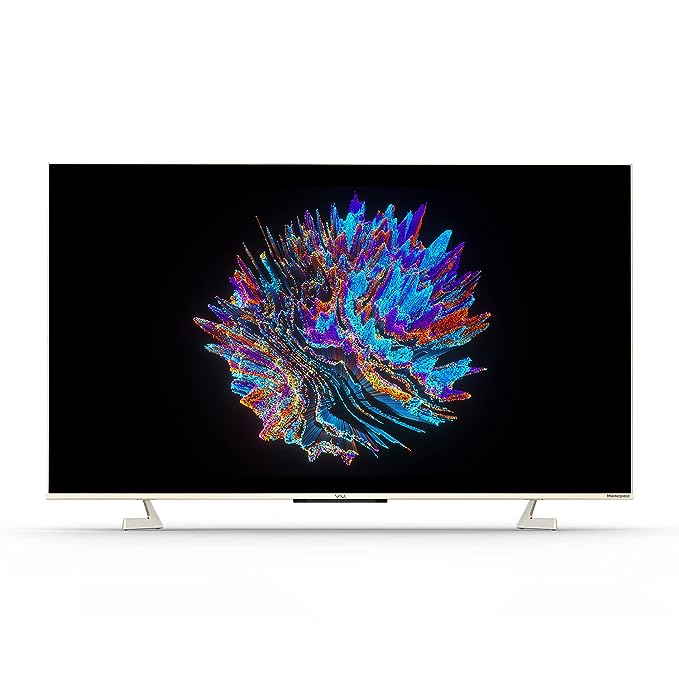 Taking about the specifications of Vu Masterpiece Glo QLED 4K QLED tv with a 120Hz refresh rate display. Where the display has 3,840x2,160 pixels of resolution that has a peak brightness of 800 nits which is impressive. The Vu Masterpiece Glo 4K QLED series smart TVs are available in 55-inch, 65-inch, and 75-inch size models. All the models have the same specifications and features across all the models instead of the display size. It features 10-bit colour support, HDR10+, HLG, and Dolby Vision IQ that will enhance the picture and audio quality of these TVs. All the model comes with 4.1-channel 100W speakers, 4 master speakers, and a subwoofer. Every single model has Dolby Atmos support which will enhance the movie experience with surround sounds.

These TVs are powered by an unnamed quad-core processor with 3GB of RAM and 16GB of internal storage. It runs on Google's Android TV operating system where you get the advantage of Google Play, Google Assistant for voice control, and Chromecast. You can also watch your favorite web series and movies on Netflix, Amazon Prime Video, and YouTube. The company claims that all three models support AMD FreeSync, which helps in reducing lag that is beneficial in gaming. The company has given an Auto Low Latency Mode (ALLM), Variable Refresh Rate (VRR), and HDR gaming support. The models will provide the best gaming experience with no lag. If you are a gamer then you have to choose the best wireless headphones that are also important with the best device.

All the models come with all the common connectivity features like Wi-Fi, Bluetooth v5, Ethernet port, four HDMI 2.1 ports, a USB 3.0 port, a USB 2.0 port, a digital audio output, AV input port, and a 3.5mm audio headphone jack. The remote of all the models work on Bluetooth/IR with English and Hindi Google Assistant. The TVs also have an ambient light sensor which makes the TVs more upgraded.